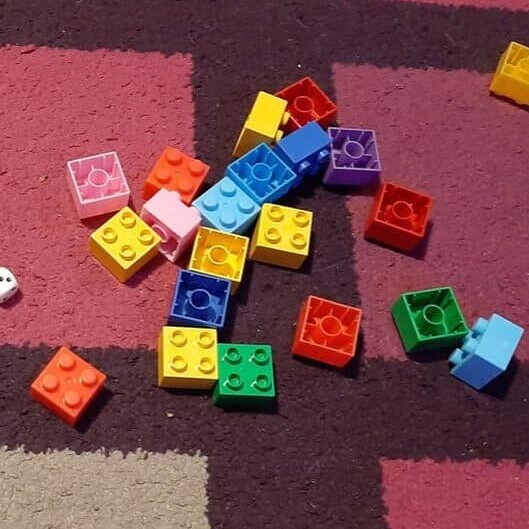 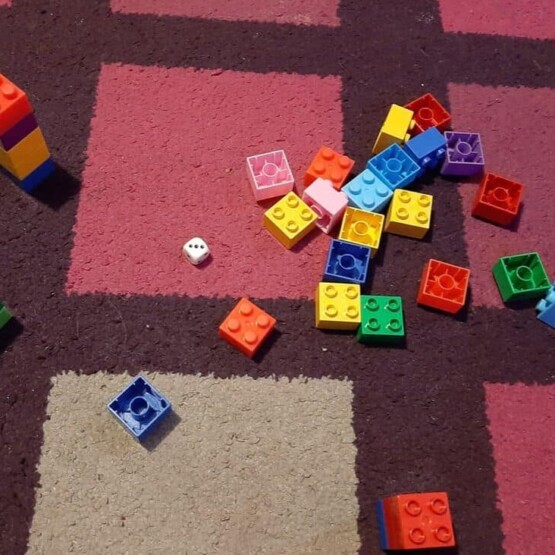 ​The idea behind this is to get you thinking about really simple yet fun stuff you can do with your small folk. We mean stuff that really is no cost and involves only the things that you have lying around at home. This involves a bit of creative thinking and using what you’ve got in a different way. However, once you have started playing these simple games, you are sure to find yourself creating others and adapting these. I’m going to try and help you to not feel restricted by not having the ‘right’ things available and learn to improvise with what you have to hand instead. Today’s focus is on simple Lego games, using your Lego or Duplo for a variety of fun activities.

​To do all these activities you will need

10 lego bricks per person. If you don’t have lego/duplo then wooden blocks, stickle bricks, dominoes, jenga, in short anything that you can stack up.

A dice. Check your board games for a dice or a spinner; even a random number generator on your phone will work.

A tea towel. Or any alternative you can use as a cover, for instance a muslin square, sheet of paper, kitchen roll, a ​t-shirt.

Tape. String, a ruler, a piece of paper or the edge of your rug, simply something you can mark a straight line with.
​

You can either play cooperatively and try to get all the bricks into the tower as a team before it falls over or play against each other, Jenga style. The player that makes the tower fall loses.

10 bricks per person
A dice

To be the first to build a tower of 10 bricks.

Take it in turns to roll the dice, on the first round whatever you roll you add that number of bricks to your tower, on the second round you take away the number of bricks off your tower. (If the number to take away is more than you have you take them all and end up with zero, no minus figures here!) Keep going, alternating adding and taking away until someone has a tower of 10.

To make a mirror image

This works best in pairs or an adult and a team of children. Mark out a straight line using the tape. Choose who is creating and who is making the mirror image. The creator uses their bricks to make a pattern on one side of the straight line. Once the pattern is in place the other player or team tries to create the mirror image.
​

Lego game 4: Which brick is missing?

To identify the missing brick

Lay out some bricks on the floor/table. Depending on the age of your little one and how easy or complex you would like to make it, you can choose to do anything from a small number of bricks in a line to a larger number in a complex configuration. Let your child see how the bricks are laid and ask them to try and remember which one is where. Cover the arrangement with a tea towel whilst secretly removing and hiding one brick. Uncover and see if you child can describe the missing brick.

Identical sets of 5-10 bricks for each person playing

Build a simple sculpture that the other players can replicate.

Choose who will be the builder and who will be copying. The builder secretly makes a simple structure using the bricks they have. (Adaptations: For younger children you can use a small number of basic bricks, similarly, for older children you can use more bricks and more complicated ones.) Show your sculpture to the other players then see if they can make one that matches.

​​I hope that this has given you a few ideas of how to use your lego or other bricks in a new way! I would love to hear how you’ve been using your lego bricks, any idea on how to expand or adapt the games here or please adding any that you play at home with your little people. Have fun, experiment and I look forward to seeing what you’ve been doing!

We also have several other blogs in our series of low cost simple activities to entertain you at home such as Things to do with wooden blocks, activities with a pen and paper, and store cupboard playdough.

Jeni is a wonderful, compassionate and inspiring woman. She says “Just because our parenting is gentle doesn’t mean it doesn’t make a difference. The way we raise our children will impact how they feel about themselves & the choices they make as they grow up. I want to see things change in their lifetime, I want to fight back against the childist views of our patriarchal society.

I want to see a world where children are allowed their own autonomy; a world that lets them learn for themselves & make their own mistakes. I want a society where diversity in all its forms is celebrated; where neurodiversity, mental health, sex & sexuality, gender, politics & all these subjects that are shied away from, are talked about openly. I want a society where parents are inspired & supported to make the choices that work for them & their families. Oh, & to save the planet at the same time!”