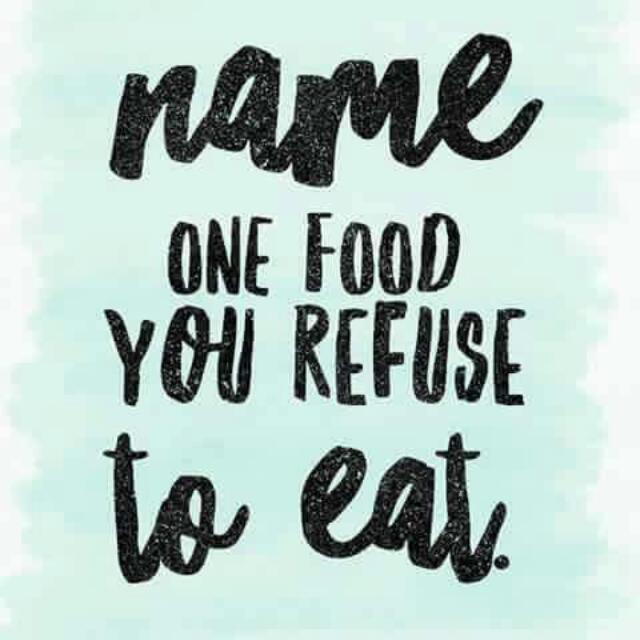 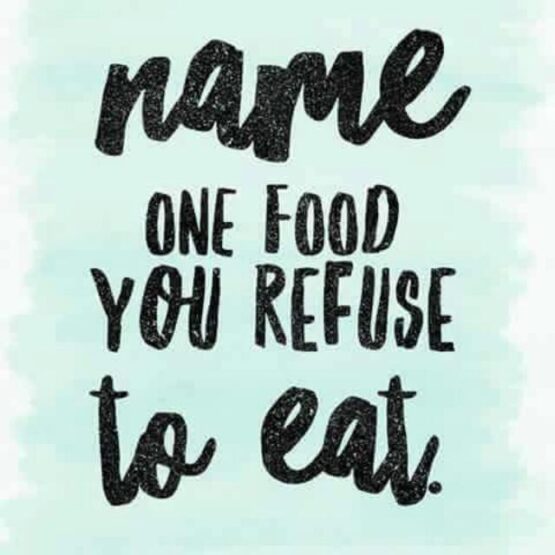 This image popped up on my newsfeed yesterday, and it got me thinking about eating.

What food would you refuse to eat?

Mine would be oysters. They just don’t appeal to me at all. Never tried them. Don’t want to try them. Couldn’t pay me to try them. If I see someone eating them, I feel a bit queasy. But I’ve never tried them and couldn’t tell you what they actually tasted like.

However, it’s ok for me to not like oysters (even though I’ve never tried them). If someone offered me oysters and I said, ‘No thanks’, they’d leave me be. If they didn’t – if they berated me, punished me, humiliated me, or conversely tried to bribe me or promise me a reward, how would I feel? Embarrassed. Annoyed. Under pressure. Out of control. And probably sick if I ate it.

When your child refuses a food

Now think about a child; your own child, who refuses to eat a particular food. (Or if they’re anything like mine, refuses a huge variety of food) They haven’t tried it, and they don’t want to. It just doesn’t appeal to them. How is that any different?

Newsflash – it’s not. If we are free to have likes and dislikes without consequences – even if they’re foods that we’ve never actually tried – then our children should be too.

What can be a problem is the way that we might respond to these (very natural and very normal) eating behaviours. The implications that our responses can have on their future relationship with food are huge.

If you force them to eat something then they learn that they are not in control of their own food choices and their own appetites. Bribing them with something sweet if they eat their vegetables teaches them that broccoli is something that you force yourself through in order to reward yourself with ice-cream afterwards. Punish them when they reject something and they learn that we love them less when they don’t eat what’s put in front of them. Just as rewarding them shows them that we love them more when they eat food that they don’t want to.  Do we want our children to learn that our love is something that they have to earn?

Linking food with emotions, which is what we’re doing when we punish, praise, reward or bribe, comes with its own set of issues. So does labelling foods ‘good’ or ‘bad’ or ‘naughty’. Foods are not inherently ‘good’ or ‘bad’ or ‘naughty’, just as people aren’t inherently ‘bad’ or ‘good’ or ‘naughty’ if we eat those foods. Food is, quite simply, food. And the consequences of linking food with emotions? Raise your hand if you comfort eat when you’re stressed, angry, or upset. Or if a little voice inside your head berates you when you eat something you ‘shouldn’t’.

So if we don’t punish, praise, reward or bribe, how do we approach tricky mealtimes? How do we encourage them to try new foods?

With no pressure, no punishments or rewards, and no consequences. We approach mealtimes by leaving them to eat, or not, what they choose. It’s our responsibility to provide the food, just as it’s theirs to choose what and how much to eat from the selection we provide. This is known as division of responsibility and is part of the principles Carlos Gonzalez uses in his book “My child won’t eat” which I would highly recommend reading if you are worried about your child’s eating.

Eating together as a family can help, as can serving food buffet-style and letting them pick what goes on their plate. If you have to talk to them about what they’ve eaten, try a sports-commentary style: ‘You tried a bit of carrot’ And relax – don’t make mealtimes a battleground. Your child won’t become more disposed to willingly eating a food if you get stressed about it, very much the reverse, in fact.

Their tastes will change

Newsflash number 2: as your children get older, their tastes will naturally change and they will eat foods that previously they wouldn’t entertain or even actively disliked. We don’t have to do anything to encourage this, aside from having a variety of foods available for them to try if they want to.

I know this because this used to be me. I was a ‘picky’ eater right through until adulthood. Foods that I used to hate or had never even tried? Peanut butter, pepperoni, hummus, feta cheese, mature cheddar, celery, Thai food, Indian food, salmon (to name a few). What changed? My sense of taste and my likes / dislikes in terms of flavours. No-one ever pressured me to eat those things, and because nobody pressured me I didn’t build any negative associations. One day I simply decided to try them again and discovered that actually, I quite liked them.

That being said, I don’t think I’ll ever eat an oyster, but you never know…

The CalmFamily Toddler eating workshop covers all this and a whole lot more.

​Find support from a CalmFamily consultant in your area or online

Interview on BBC Good Food with Carlos Gonzalez: What to do if your child won’t eat

The CalmFamily leadership team comprises five mums striving collaboratively to make the world a little calmer. We have some fifteen children between us and we live, work and play together, though not always (or even often) in the same physical space. Though we do try because we love to be together. We work hard to bring other families high quality resources to support their lives.
See more articles