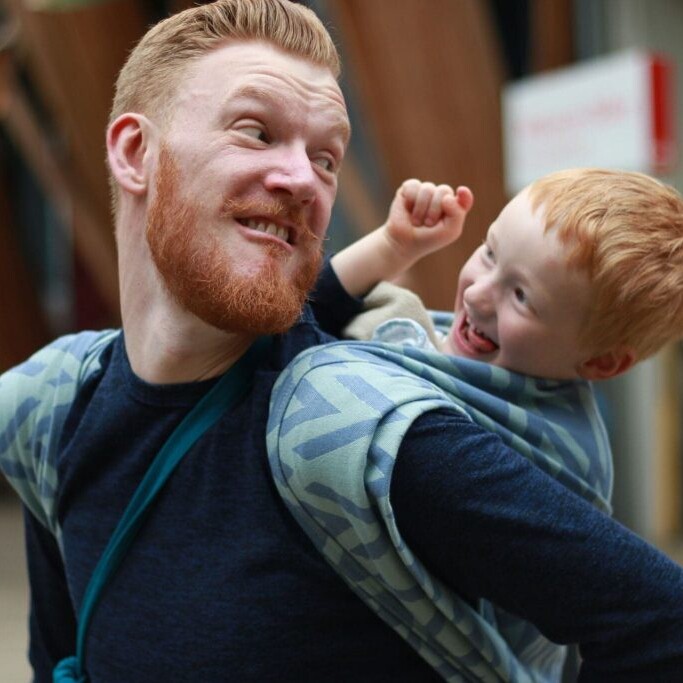 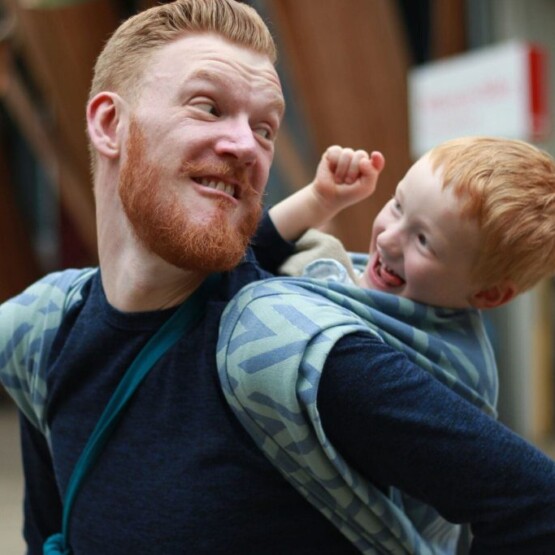 We are so happy that dad and former sling consultant Paul Webster has written this amazing blog around his experience of slings as a tool for his parenting journey. Thank you for sharing your words Paul.

Baby wearing is a subject close to my heart, as my early parental life was a struggle. When I first became a dad, I had the internal discussion about what kind of dad I wanted to be and if I would be up to the job. I’ll be honest, it wasn’t the easiest of starts. No one tells you how difficult it will be and how massive the responsibility is to look after the tiny life that is passed to you.

I had this baby that cried and I didn’t understand why. Looking back, he cried no more than any other baby would. However, not knowing how to soothe him, made me feel like a bad father. I found it difficult and got frustrated very easily. This frustration was born out of disappointment with myself for not living up to the preconceived idea of how fatherhood would suit me. I thought back to being in the Assisted Conception Unit whilst we were having IVF and how excited I was about being a parent, yet when Isaac arrived it seemed a million miles away from what I’d imagined.

I hadn’t had any real experience with babies and so the learning curve was huge. The first few weeks were the hardest and when I felt at my lowest. It was an emotional time generally, but there were points that I would just sit and cry. Something that I never spoke about to anyone else other than my wife.

I stress out very easily in every part of my life and this was the case in the early days. Patience and a baby with no initial routine, taught me to take each day as it comes and not to dwell on the little things. ‘Has he drank enough milk today?’ ‘He isn’t eating very much?’ These were the types of questions that plagued my day, until I learned to let go and realised that Isaac is his own person and no babies do exactly as a book says they should.

Things got better. Understanding his semi-routine; the amount of time until he would want another feed, another nap – gave me confidence in my abilities to care for him. From here I stopped doubting and truly began to enjoy fatherhood.

Our relationship went from strength to strength, as I always hoped it would. I found new ways to bond, one of which was baby wearing. I carried my son in a sling from 6 months old. My wife found slings before me and, at the beginning, I wasn’t interested in the slightest. It wasn’t until a local market that I opted to try it out for practical reasons and from there I was hooked. It increased my confidence as a parent and helped me realise that my child wasn’t this daunting part of my life that I should worry about, but was in fact a beautiful and awe-inspiring little boy.

Wearing my son and having him close, allowed me to chat with him as we went about our business and as he grew he chatted back, allowing us to have the most lovely conversations about the world around us. It also gave the added benefit of slingy cuddles, which helped build our connection and was an incredible feeling to get that affection.

Babywearing for me, wasn’t just about the physical activity of carrying my son, but also about the support and friendship within the community. Through groups like Sheffield Slings and Sling Dads, I met some amazing mums and dads and shared experiences. Being a part of a community meant that questions were answered, advice was offered, friends were made and cake was eaten.

This support attributed to the growth of me as a father and I wish I’d known about these groups from the start, because if I had, my initial journey could have been different. I wouldn’t have felt so out of place at my local children’s centre as the only man, surrounded by people that looked at me like I had wandered in by mistake. Baby-wearing eventually filled this void and brought some much needed relief.

My journey continued until he was 5 years old, at which point he decided that he no longer wanted to be carried in the sling. This was a tough day, as slings weren’t just pieces of fabric, they meant so much more. They pulled me from a place of self-doubt and paternal depression, that could have gotten much worse if babywearing and the community had not provided light in my darkest hour.

I volunteered at sling libraries

Over this time I ensured that I paid it forward, by volunteering at local sling groups, undertaking baby-wearing peer supporter and sling consultancy training, and writing prolifically on the subject of paternal mental health. This made me feel like I could finally pay back all that the sling community had given to me, by helping to offer advice and support to other parents.

Over the last 5 years I have seen amazing changes and milestones; eating solids, crawling, walking, his first words and starting school. He has grown from this tiny baby, into an amazing little boy. A little boy that is fearless, funny and independent. I’m so proud to have been there at every step and am even prouder to be his dad.